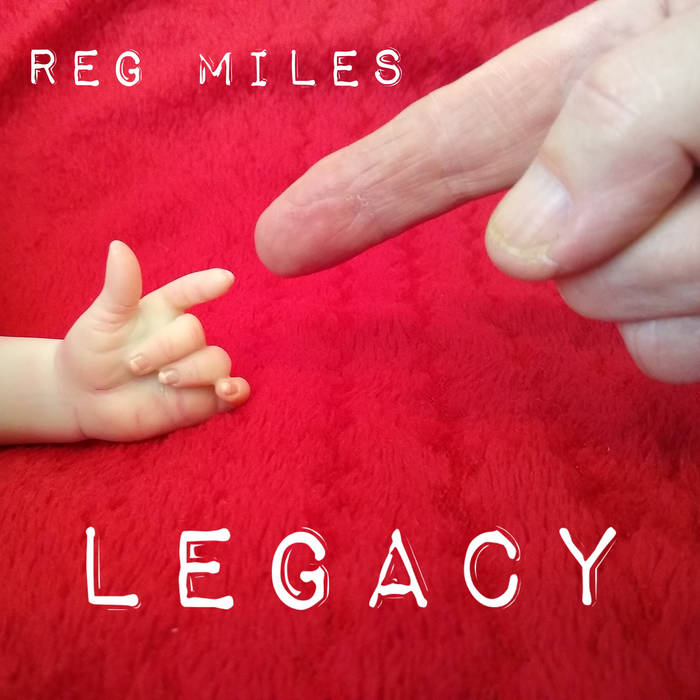 Reg was born in 1954 in Maidstone, Kent England.
In 1970, he made his debut at the Rose Folk Club in Maidstone where he became a regular performer.
Reg is now planning to return to performing his songs.
Details of his appearanceswill be announced very soon on his website www.regmiles.co.uk ... more

I’ve tried to do the best I can
And strived to be a better man
Perfection isn’t what I’ll ever be
So make the most of life on earth
Know your purpose, know your worth
Try to find the good in all you see

How will you remember me?
A picture in a magazine?
A black and white image on a screen?
Or will it be a memory
In a fleeting reverie?
Speaking to you of the life I’ve seen

My songs are stories of my life
The good, the bad, the joy the strife
Reflections of emotions flowing strong
I’ve always tried to get things right
And got it wrong more than I might
So all I have to leave you is my song

Chorus
Track Name: We Will Make The Kaiser Dance
When Vesta Tilly did a show
To France she told us lads to go
Vesta said “Boys just don’t sit here,
Go straight outside and volunteer”

The sergeant signed us one by one
For uniform, tin hat and gun
He said, “Lads when you get to France,
You can make the Kaiser dance”

And now that bloody war is done
I’m all that’s left, me pals are gone
We all were sure we’d go to France
And we would make the Kaiser dance.

I march for them on Remembrance Day
And for their souls I kneel and pray
Their bodies lay in the fields of France
As we tried to make the Kaiser dance.

Oh Edwina oh Edwina
Can you tell from my demeanour
That I love you from the bottom of my heart
Oh Edwina oh Edwina
Even though you're just a cleaner
I love you even when we're far apart.
The years have quickly passed away
Edwina's gone and couldn't stay
My first love that I still adore
I know our love could never be
The reason is now clear to me
She was nearly thirty three
And I was only four

I watched her polishing the floors
And clean the knobs on all the doors
She was the woman I adored
Edwina I'm in love
I really couldn't ask for more
Edwina I'm in love
Track Name: Hundredth Birthday
I sit and reflect in my twilight years
Where has my time all gone?
There’s nothing left in life to do
But wait for the end to come

A hundred years upon the earth
Is not a gift it’s just a curse
The room grows dark the pain has gone
I’m back where I now belong
Track Name: Pip, Squeak & Wilfred
With me Pip Squeak and Wilfred polished on me chest
Ready for rememberance day I have to look me best
Marching with me comrades we all stand out from the rest
With our Pip Squeak and Wilfreds polished on our chest

The patter of machine guns and the pounding of the shell
The mud, the blood and trenches, seemed to us we'd gone to hell
Death was all around I won't forget that bloody smell
When I get back to Blighty I'll have such a tale to tell

A country fit for heroes well that's what the Generals said
How can you be a hero when you’re in the mud and dead?
Me mates have joined them up above, Edward, Bert and Fred
A pride of fighting lions who by donkeys were all lead.

And now the years have gone we march along the avenue
They say we are the lucky ones because we made it through
Each year we're getting less and less, we really are the few
You wouldn't start another war if you knew what we knew

You should feel so good inside,
It’s an honour for your son to die,
Eternal life for your son.
You look on, you just look on.

He has paid the highest price,
For those that rule need sacrifice,
His life had only just begun,
He’s just one more Mother’s son.

We have never learned through time,
As we send our son’s up to the line
And when one hundred years are gone
Mother’s still will weep for their sons.

On gossamer wings the fairy sings
And glides right over the meadow
With her hair of gold
And her clothes so bold
And her boots of shiny green leather
Track Name: I'm Going to a Funeral
I'm going to a funeral so please don't make me late,
A man is waiting for me just outside the pearly gates
He'll go through my life story and then decide my fate
Don't make me late,
Cause he can't wait,
I've gotta see a man outside the pearly gates

I’ll get to meet my granddad that I've never met before
I hope he will be waiting just behind that pearly door
With friends and my relations and oh so many more
So, open the door
I emplore
I want to meet my rellies that have gone before

In the evening
The clouds are creeping
Making shapes across the skies
And in the evening
You should be sleeping
So you must close both of your eyes.
(Close your eyes)

In the evening
You should be sleeping
For it is the end of the day
Track Name: Go to Sleep (My Little One)
Go to sleep my little one,
The land of dreams is waiting for you
Little one, tonight
The night will soon be gone
And when it’s giving way to dawn
Then I’ll watch the sunrise
Open up your eyes again

Go to sleep my little one
The daylight’s nearly gone so sleep
My Little one, sleep tight
And when tomorrow’s near
I will still be here
And then I’ll watch the sun’s rays
Brush across your face again.

The day that’s nearly gone was filled
With laughter, tears and song
But now it’s time to rest your head and sleep
The daylight’s nearly past
And the moonlight shadows cast
Their arms around you safe your soul to keep

Go to sleep my little one,
The land of dreams is waiting for you
Little one, tonight
The night will soon be gone
And when it’s giving way to dawn
Then I’ll watch the sunrise
Open up your eyes again

The day that’s nearly gone was filled
With laughter, tears and song
But now it’s time to rest your head and sleep
The daylight’s nearly past
And the moonlight shadows cast
Their arms around you safe your soul to keep

Go to sleep my little one,
The land of dreams is waiting for you
Little one, tonight
The night will soon be gone
And when it’s giving way to dawn
Then I’ll watch the sunrise
Open up your eyes again

Bandcamp Daily  your guide to the world of Bandcamp